With only twelve weeks out from the Kathmandu Coast to Coast, North Canterbury’s Hannah Romano found herself without a teammate. Rather than give up, she did what anyone with her sporting contacts would do and looked for the best kayaker on her list. The top contender just so happened to be former canoe polo World Champ - Olivia Spencer-Bower. 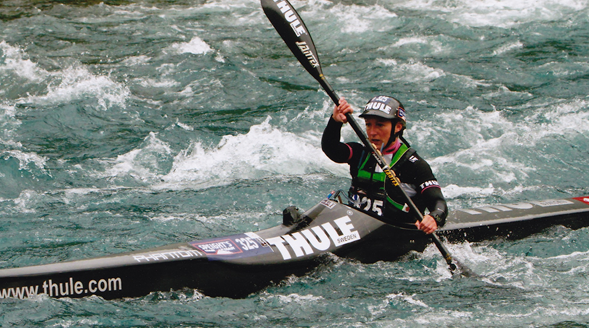 “I sent Olivia a message basically saying I know this isn’t much notice but she would do the Coast to Coast with me and lucky for me she said yes.”

Fortunately, Spencer-Bower had competed in the Spring Challenge back in September so her fitness was good, despite having had her first child Noah only nine months ago.

“I was about 20 weeks pregnant when I decided to enter the Spring Challenge thinking it would be a good goal for me post birth. After I had Noah, I worked intensely with my women’s health physio to make sure I was ready to start training.

“Scheduling training is so much more important with a baby too. Noah’s not the best sleeper waking every one to two hours since he was 4 months old. But instead of wallowing in the fatigue, you soon learn to accept it for what it is and realise that if you don’t get up and do something for yourself in the precious spare time you might be lucky to get,  the only person who misses out is you and it really affects your mental health.

“I find that by making it a priority to do some exercise for me I’m a much better mum, partner and friend because I’m pouring from a full cup.”

That is something her team mate fully appreciates and understands first hand. With two young sons of her own Cooper, 3 and Jonty 18 months, Romano knows how precious those training windows are.

“I often have to get a baby sitter or ask my mum to watch the boys while I train, so I feel like I can’t waste any of those opportunities. There’s always going to be other things that need to be done, work, errands house work but it’s so important to have time for yourself to exercise.”

In the seven times she has competed in the Coast to Coast, both the individual and team event, Spencer-Bower has finished either first or second. Romano has competed three times and has finished in the top six each time. Despite their previous success the pair say they won’t be putting pressure on themselves for top place finishes this time.

“I think having a baby gives you so much more perspective, sometimes we put too much measure on that small margin of winning or losing,” Spencer-Bower says.

“I feel like I have spent the past five years either being pregnant or breastfeeding so entering the Coast for me this time is about getting back to myself and what I love doing,” she says.

Romano, who is an online fitness coach, says she hopes other women will be able to look at her and Spencer-Bower’s journey back to multi-sport after babies and be inspired to give it a go.

“Honestly I get how hard it is.

“Six months ago, I tried to run 5km and it felt impossible, I actually cried. Then two weeks ago I competed the Queenstown half marathon, it’s just about finding a goal and working at it consistently.”

Romano, also battles with Crohn's disease, a chronic disease that causes inflammation and irritation in the gastrointestinal tract. Despite often having debilitating flare ups of the disease Romano hasn’t let it hold her back.

“It’s just something that I have had to learn to live with and I manage it the best I can. It can be tough, but I don’t want it to stop me from doing what I love.”

Spencer-Bower will be taking on her favoured kayaking leg of the event and Romano will be tackling the run. The bike duties will be shared.

Both Spencer-Bower and Romano know the last bike leg well.  Spencer-Bower grew up in Swannanoa and Romano lives in Clarkville so both are very familiar with the long, straight stretch of South-Eyre Road.

Despite the challenges of incorporating training around young families Romano and Spencer-Bower say they are best versions of themselves when they are active and having a goal like Coast to Coast has provided extra motivation to make the time to train.

Romano has the countdown on her watch.

“Every morning I wake up and I see I’m one day closer.”